Pap was 86 years old. He spent most of his life working on his farm, driving his tractor and feeding his chickens. He worked every day except Sunday when he went to church. He lived in a barter society in Western Pennsylvania, where he traded his eggs for his neighbor’s homemade salami that he strapped to his belt. He would carve off bite sized pieces of fresh salami and snack as he worked the farm. One day, his children drove in from the city and convinced him to sell the farm and move to a nice retirement home. Pap’s figure with his leathery skin and sinewy body was in stark contrast to the pale and squishy bodies of his children. Being the caring and convincing children that they were, he was convinced to make the change. For heaven’s sake what would happen if Pap got sick with no one around to help? Within one month of moving to the retirement home, Pap was dead. Was there a lesson to be learned from Pap’s story?

One view of aging and dying is that, over the course of a lifetime, things simply wear out due to cumulative damage caused by exposure to toxins, injuries and elemental hazards. The laws of thermodynamics dictate that everything tends to become more disordered over time.

If aging and dying were only a result of external hazards and wearing out processes, why did Pap die soon after leaving his routine? Why do mice and rats live only two or three years, even in protective conditions, while humans live eighty? Both humans and rats are exposed to similar stochastic factors and environmental hazards. The answer may have to do with the capacity for proliferation. Rats are prolific breeders, while humans produce few offspring. The rapid rate of reproducing would rapidly deplete the ecological niche and would lead to extinction. Because they repopulate so quickly, rodents are able to survive as a species by having a short lifespan. Humans, on the other hand, procreate slowly; until modern times, they didn’t seem to exhaust the environment sufficiently to cause extinction. In addition, having a few wise elders around may have helped the tribe survive. Consequently, humans have a longer lifespan. But there must be some innate mechanism that is responsible for programming the length of such lifespan.

Is it a random matter that we sprout our permanent teeth, blossom into puberty or lapse into menopause at the same age? We can also maintain our sleep and wake cycle even when isolated from natural light. Even when day and night are artificially shortened, we still tend to follow a 24 hour schedule. Our body’s natural inclination towards a rhythm reveals there may be an internal clock that guides our behavior. There are changes we can make to our lifestyle to disrupt or influence this clock. For example, night time workers wear sunglasses during the days and use blackout curtains to entrain their internal clock to a reversed activity cycle.

If our behavior can alter our daily rhythm, then perhaps we can make changes to influence the choreography of our lifetime. As with many of the cyclical and life milestone phenomena, there appears to be a biological clock that resides in the hypothalamus of the brain. Recently, the Albert Einstein Medical School group demonstrated, in rodents, that this biological clock can be reset to either make young mice older or old mice younger by injecting exosomes that contain epigenetic codes for regenesis.

Are there things that we can do now until we can provide exosomes to reprogram the Grim Reaper Clock™ in humans? It has been recognized that dietary restriction and exercise can extend the lifespan; it is thought that these effects may be due to direct effects on cellular metabolism, but their effects on reprogramming the hypothalamic clock is less certain.

The hypothalamus is responsive to input from various parts of the brain. Certain observations suggest that the Grim Reaper Clock™ may be reset because of a top down control exerted by an eloquent brain during certain experiences. For example, it has been observed that when old folks are moved into an assisted care facility, surrounded by elderly denizens, their life expectancy appears to be shorter than those elders that engage in activities with children. Furthermore, those old folks who engage in a spiritual practice appear to have longer lives as well. Just like a muscle, the brain needs to be stimulated and worked to keep its function. Finding purpose in day to day life seems to be a key element in longevity and optimizing brain health.

Until we can reprogram the Grim Reaper Clock™ with exosomes, we can exercise often, limited our caloric intake, keep our minds active, play with children and connect with a spiritual force. At 136 years, Pap may not be alive today, but he may have just lived a happier, healthier and longer life if he was working the farm, nibbling on that homemade salami and, of course, going to church on Sunday. 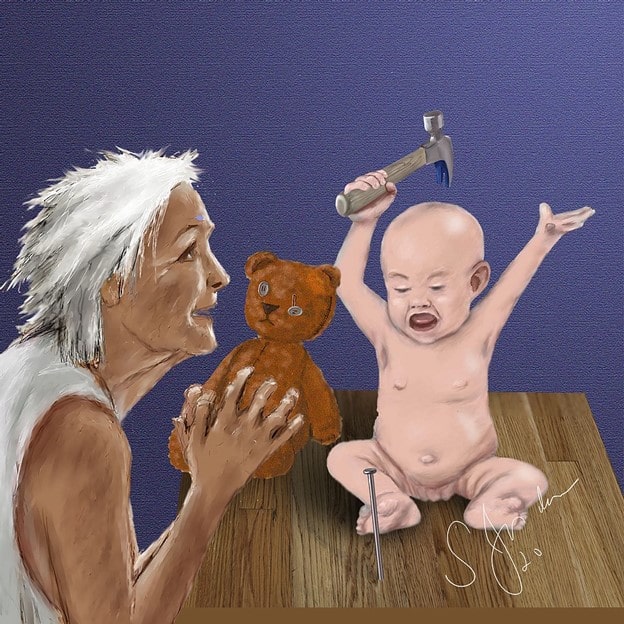